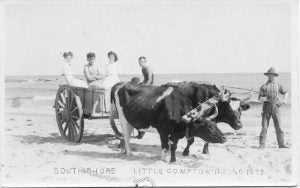 Rhode Island is one of the few states in the country where the ability to access the shoreline is a guaranteed right, enshrined in our state constitution. Our “shoreline privileges” include, but are not limited to, passage along the shore, swimming, fishing and collecting seaweed (Article 1, Section 17). However, where those rights begin and where those of private property owners end has been a point of confusion and contention for decades, which is why the RI House formed a special commission last year to study shoreline access.

At issue are potential inconsistencies between the RI constitution and a 1982 state Supreme Court decision, which defined the public shoreline at the mean high water line. Mean high water (MHW) is an elevation, calculated from an average of all high tides ­— two per day in Rhode Island — over a 19-year period. But since this boundary is impossible for any casual beachgoer to see and difficult to find without precise surveying equipment, problems have naturally arisen.

The 12-member panel of experts and lawmakers has been meeting monthly since August 2021 to discuss ideas on how to improve access and to clarify where, in fact, the public is able to exercise their shoreline privileges. This has included presentations and testimony from state regulators, recreational users, legal and scientific experts (including geologists from the CI), and members of the public. At one meeting, CI scientists presented data from the state’s south shore beaches showing that the MHW line is underwater most of the day, meaning the public would need to wade into the ocean to legally walk along the shore.

At last week’s meeting the commission appeared to have reached consensus that the public should always have access to dry sand along the shore extending 10 feet landward from the last high tide swash line­ — the visible seaweed line on the beach left from the last high tide. Some on the commission have pointed out that ox carts, historically used by farmers to gather seaweed from the shore would have been about 10 feet wide.

The panel is now developing a draft legislative proposal for consideration by the state General Assembly later this year.

CI’s letter to the Commission