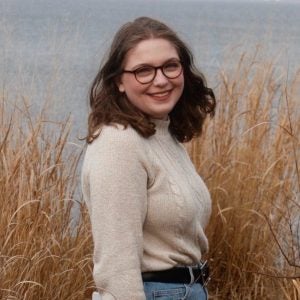 Listen up, undergrads – Hannah Klinger has some sound advice for you.

Studies are one source of education; work experience another. “I really enjoyed my time at the Coastal Institute because I learned so much about coastal issues,” says Klinger, now a data analyst for  Massachusetts General Hospital based in Boston, MA. “I took that knowledge with me.”

In her role as an administrative support student for the URI Coastal Institute (CI) for two years, Klinger found herself able to assist with a variety of events and products, all in the name of community education. She especially liked researching data and gathering information for 41 Degrees North, a centerpiece publication of the CI and Rhode Island Sea Grant. “Researching material for the magazine gave me the chance to think about topics like seaweed aquaculture and pollution,” says Klinger. “I feel like I have some understanding now about coastal issues.”

Other assignments she enjoyed during her CI stint? “I liked working on CI web sites,” she says. “We hosted and attended conferences, and I met scores of people with an incredible range of specialties.” Klinger, who currently carries out her analyst work at home, also says that it’s been a positive that the CI has continued to function seamlessly during the pandemic.

Puzzling out information is what drew her to math in the first place – “it’s about finding patterns,” she says – so securing a position with the CI made for a good fit. “I like that I was able to help provide information about coastal issues to many audiences.”

“It’s an important mission of this institute to give people – whether they’re decision-makers, community members, or students – compelling information and tools so they can engage with coastal issues on their own terms,” says CI Director Judith Swift. “Hannah exemplifies why the CI student experience adds another layer of knowledge and is as much an internship as a job. Hannah became an important member of the team and we wish her much joy and success in her love of data analysis.”

So by all means, advises Klinger, who hails from South Kingstown, RI, if you get the chance to work as a student at the CI – grab it. “It’s a job, yes, but it’s also a great way to gain information from leading experts and learn about issues that may be new to you.”